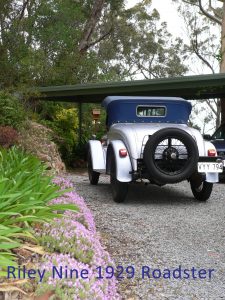 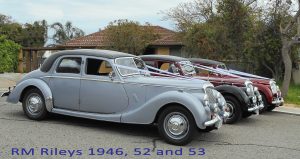 Rileys in Movies and Video
from a variety of sources

Rileys in “Old” Movies and TV
In the 1953 movie “Spaceways”. A Riley in police makeup. At around 1:04:40  here
This one’s exceptional! In his book Riley RM-Series James Taylor says a prototype Drophead “featured” in a little-known British film called The Calendar. Well here it is; all several seconds of it. Personally I would have used some word other than featured but that`s me. I left a bit of Greta Gynt in the extracts to make the viewing worthwhile! here
An RM Roadster in “City Beneath the Sea”. 1954 movie. You might notice that the Ford Avenue Productions credits at the end are longer than the actual movie extracts but I’m sure you’ll find the scene of South Australia in Spring with bird calls in the background equally entertaining.  here
This one’s only for the most hardened of Riley Spotters. I’m reliably told that there are Rileys in the first several  minutes of this 1953 film, “Turn the Key Softly” but I couldn`t see them. Not even a young Joan Collins could tempt me to take a second look.  here
RM in “Spin a Dark Web” 1956 movie from 1hr 8 min 40. It includes “RM” interior scenes but they look nothing like any RM I’ve experienced. here
“Gideon`s Way” first screened on TV fifty years ago. It’s been on GEM in Australia in recent times. There’s an RM Roadster in an excerpt from the 1958 film on which the series was based. The film was called Gideon’s Day. In the US it was known as Gideon of Scotland Yard. Confused? Just check the sound as it roars off!  here
RM in “The Secret Place” 1957 movie at 29.48. here
Jack Hawkins drives an RM in the 1951 movie “No Highway in the Sky” at 5.41 mins. here
RM in Les Distractions 1960. here
An RM close behind Norman Wisdom in Trouble in Store at 36.56 and again at 36.59. here
An RM in Dial 999, a popular 1950s series depicting London’s fight against crime at 0.36. here

Rileys in Period Documentaries or Video
Much easier to spot Racing Rileys here in these two. C R Whitcroft in a Riley wins the 1932 RAC International TT at Ards (click here) and Freddie Dixon wins the 1934 race in a Riley. here
A Riley goes over the barrier in the 1936 British Empire Trophy Race (1936) here
Captain Shipwright and young daughter on the track at Brooklands. here
Against the Clock. Nuffield cars including a Pathfinder on the track . here
It’s about MGs but the Abingdon Factory has RMs in the background. here
Freddie Dixon and The Bluebird at Brooklands with sir Sir Malcolm Campbell providing the voice-over. here
In The 1954 Monte Carlo at 21 seconds. here
In The 1949 XII Rallye International Des Alpes at about 1 minute 03.  here
In “Thoroughbreds All” competing in The 1950 Monte Carlo at 2 mins 33 onwards. here
Amateur film of the 1938 RAC Rally showing the 3 Riley Sprites that won the team prize, and tests on the sea front typical of rallies of this era. here
The Riley Works Coventry 1930’s. here
Abingdon works. MGs and RMs. here
1946 “The Mighty Apollo” pulls a Riley Nine with his teeth. The little boy on the front of the Riley is Grahame Glanville, a long-time member of the Riley Club in Victoria. here
A Riley in a Police film. here
Filmed by Marie Partridge, of the Pinner Cine Society, this film shows races at Silverstone, Northamptonshire in 1952. You have to be eagle-eyed and know what you’re looking for. here

Other
The Antill Reenactment 2019 -Pre-War Rileys in a drive from Perth to Sydney. here
In a promotional video for WBS Motors, a car restoration company in Ireland. here
An RMD goes for an extraordinary sum at auction. See the auction and gasp. here
Riley in a Wedding, South Australia, 2019. here
Mark J Hinkling’s RMF restoration experience. here
Restoring a Riley Grille – see why it’s so damn expensive. here
A Riley Nine Special with a Tiger Moth engine. here
A beautifully-presented video of a 1949 RM Roadster in loving hands in Ireland
complete with column gear change. here